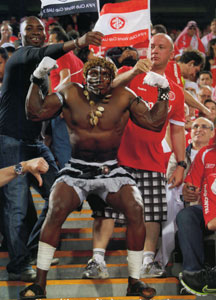 Whatever stadium TP Mazembe are playing in, the players can always count on the booming support of their 12th man: the entertainment group called ‘100 pour 100’, a phalanx of tireless supporters - singers - dancers -musicians that are part of the club’s family.

100 pour 100 are not far off celebrating their 30th birthday. Indeed, it was in 1983 that the group was named by its sponsors NKOLOMONI (also known as Ninja) and Mutamba KELEMUTA, goalkeeper KIDIABA’s older brother.

But behind them stands the slim figure of Moïse KATUMBI, oh yes, already there… the man who was cosseting his own Corbeaux club had noticed that young day labourers sang while they were carrying their loads. « Form a group and come to the stadium to create some atmosphere » he told them.

No sooner said than done: about thirty teenagers of about 14 or 15 took up the challenge. 100 pour 100 had just been created…

The group supported Les Corbeaux, of course, but also Mazembe, Moïse’s older brother’s team, when they were doing battle with teams from Kinshasa. When Les Corbeaux and Mazembe merged, it was only logical that the entertainers would become Tout Puissant Mazembe’s official band.

« Today, there are way more than 200 members, aged 20 to 50 » secretary general Rex MUMBA says proudly, « which means we can have two bands, one at the end of the stands and the other in the terraces opposite…»

At each match, the bands dressed in black and white provide colour and warmth at the ground. There are now 32 musicians for the two bands. The brass section sets the tone (normal, in a copper-bearing capital!) backed by 9 tom-toms made of traditional cow skin, 4 bass drums, 4 snare drums, 2 cymbals, etc. 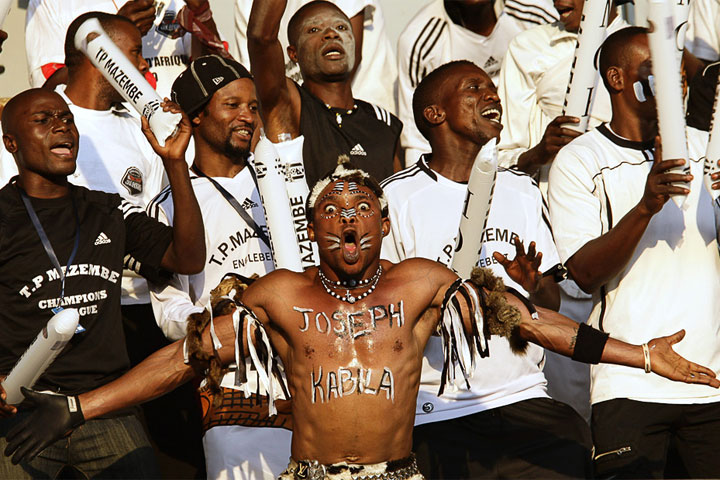 In the Emirates, even the Brazilians were drowned out…

When KABANGU or KALUYITUKA score, the Kenya arena becomes a boiling cauldron that 100 pour 100 sets on fire. The atmosphere is electric and the sound is deafening ... Coach Lamine NDIAYE says: « I would shout instructions but it was useless because the players couldn’t hear me. The music drowned out my voice. I couldn’t get annoyed with them, though, they support us so well ! »

A recent memory comes back to us : the Emirates, for the Mazembe-Porto Alegre match. Almost 5000 Brazilians dressed all in red, had taken over the stands and were dancing the samba. Until 100 pour 100 went into a battle of sound. Powerless to resist the Congolese rhythms, the local spectators, all in white, started dancing, making the Abu Dhabi stadium shake. Our Brazilian friends were outdone and left speechless…

It is a logical development that the group now operates like a business. Its musical activity rhythms the weekly schedule: rehearsals every Tuesday and Thursday, work on co-ordination two days before an African Cup match with about fifteen other groups that support other Katangese football teams (rivals of Mazembe in the EFLU), a motorised convoy the day before and the morning of the match to inform and “warm up” the supporters in the different districts.

Rex MUMBA, present since 1997, and Bailo MUYUMBA are responsible for writing new compositions to widen the range of the 50 or so songs in the group’s repertoire, including the famous « Oh Mazembe! Oh Mazembe! », the club’s anthem written by young KAZADI, better known as « Chirika », who died suddenly in an accident.

100 pour 100 swear everlasting gratitude to « boss » Moïse to whom they owe their creation, their financing and their recognition from accompanying the team world wide.

There is no lack of projects to ensure that the business lasts and keeps moving forward. We have already acquired about twenty plots of constructible land” says Rex MUMBA, « but we would like to start a transport company before the end of 2011 and create an NGO to improve our operation and maybe have some influence in the political field…»

It is evident that those devils from 100 pour 100 are not short of energy. And if the FIFA or the CAF had the good idea of launching a « Club entertainment group » contest, we bet you that the Lubumbashi musicians would be very serious candidates for a place on the podium.

In the meantime, 100 pour 100 keep on giving great support to TP Mazembe team. Rex MUMBA concludes with eyes shining : « Even when the team doesn’t play well, we are still behind them…»